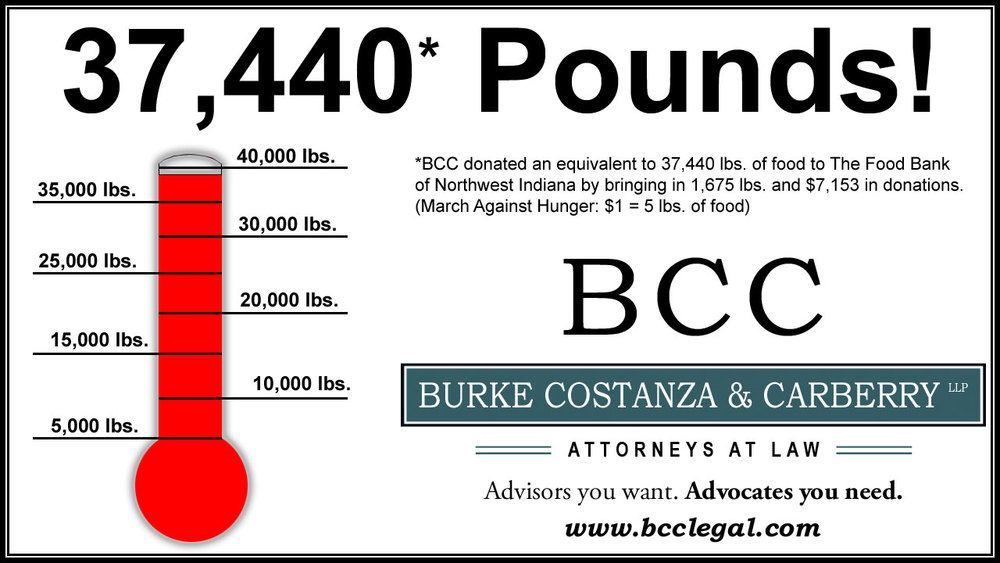 Burke Costanza & Carberry LLP won the large firm division Indiana Attorney General’s statewide competition, March Against Hunger.  This year, the attorneys and staff donated 1,675 pounds of food and $7,153 dollars to the Food Bank of Northwest Indiana.   The donation put the firm into first place in their division and ranked second in overall donations when compared with the 44 other firms participating in the contest.  BCC won the competition in 2012 and came into 2013 contest with very big goals.

During the month of March, contest organizers within the firm kept donations flowing in through a series of inter-firm competitions and practice group rivalries. Creative leadership within each of the practice groups resulted in a variety of contests, bake sales, and fundraising and food-raising efforts. Though the inter-firm rivalries and team spirit kept the contest lighthearted and fun, the participants were well aware their efforts addressed a very serious need in Northwest Indiana.    The firm kicked off this year’s campaign with remarks from Megan Sikes, advocacy manager of the Food Bank of Northwest Indiana.  Many were surprised to learn the hunger statistics within Northwest Indiana and that the Food Bank distributed nearly 5 million pounds of food to those in need in 2012.

This is BCC’s third year of participating in the contest.  Managing partner George Carberry summed up the firm’s efforts:

The generosity of everyone here at BCC inspires me.  For the third year in a row my colleagues have contributed in a very large and tangible way to those Hoosiers who are less fortunate.  Because of their efforts, Northwest Indiana families will have nutritional resources they otherwise wouldn’t have.   I particularly want to thank my colleague Ann Marie Woolwine who provided food drive leadership and made the “foodraising” experience a lot of fun for us all.

BCC awaits a visit from Indiana Attorney General Greg Zoeller for the presentation of its trophy for first place in the large firm division.